Rockford’s Sister Cities Garden was established September 21, 2008 on the International Day of Peace to promote peace and prosperity through mutual respect, understanding, and cooperation.

This garden has flags representing the countries of Rockford’s Sister Cities. The flowers in this garden represent the colors in each country’s flag. Plaques in each section of the garden describe the Sister City relationship. View the brochure for the Sister City Garden groundbreaking ceremony.

BROVARY, UKRAINE 1995
The relationship between Rockford and Brovary arose from a visit by a Ukranian soccer team. Later, as a gift to Brovary, a Rockford group traveled to Ukraine to build playgrounds for Brovary’s children. This project was the beginning of “Kids Around the World,” a Rockford humanitarian organization. Brovary is a mid-sized suburban community located near Kiev.

CHANGZHOU, CHINA 1999
The sister city relationship with Changzhou arose out of the strong business ties of Bergstrom Industries and several other Rockford companies with Changzhou. Located in the center of the Yangtze River Delta in China, the ancient city of Changzhou with 2,500 years of history now is a burgeoning industrial metropolis.

BORGHOLM, SWEDEN 2002
Rockford celebrated the sesquicentennial of Swedish immigration to the Rock River Valley in 2002. Our sister city, Borgholm, is on the island of Oland in the Baltic Sea. The King and Queen of Sweden maintain a summer home on the island. Visitors from all over the world enjoy the arts, culture, and history of Borgholm.

"They shared in the making of America. From the wilderness days through storms of war and years of peace, their toils will be emembered."
Carl Sandberg

CLUJ-NAPOCA, ROMANIA 2005
The sister city relationship with Cluj-Napoca began as a friendship between Rockford’s congressman and Cluj-Napoca political and business leaders. Cluj-Napoca, in the heart of the historical province of Transylvania, is one of Romania’s ancient Roman cities and, from the middle ages, has been know as the Treasure City due to its administrative, military and multicultural importance. Today, Cluj-Napoca is a center of business and university activity. View photos of the Sanzienne celebration at the plaza on June 26th, 2010.

Translation: "The synonym of Peace is not the absence of War. Peace is a state of mind consisting of trust, mutual understanding and hope for the coming day. Peace cannot be proclaimed, but conquered." Nicolae Titulescu

Nicolae Titulescu (Born March 1882 in Craiova, Romania - deceased March 1841 in Cannes, France) was a well-known Romanian diplomat, at various times government minister, finance and foreign minister, and for two terms, President of the General Assembly of the League of Nations. He was a member of the Freemasonry.

TOKMOK, KYRGZSTAN 2006
The humanitarian organizations Central Asia Sharing Aid of Rockford and Mercy Charitable Christian Foundation of Kyrgyzstan have established and endowed schools, orphanages, free medical clinics, economic initiatives and other charitable works in Kyrgyzstan. Friends of both ministries organized the sister city initiative. Tokmok has set aside land for a Rockford industrial park, renamed a lake after Rockford, and was the site of a playground built by “Kids Around the World.”

FERENTINO, ITALY 2006
From the 1870’s, Rockfordians have had ancestral roots in Ferentino and have maintained close ties with its people resulting in the current sister city relationship. In 1918, immigrants from Ferentino established Rockford’s St. Ambrogio Club in honor of its venerated saint. Ferentino, a modern manufacturer of electronics, pharmaceuticals, soaps and foods, is an ancient, picturesque hill town featuring Roman ruins and monuments dating from the first century B.C. View the Greater Rockford Italian-American Association web site.

"The true and solid peace of nations consists not in equality of arms, but in mutual trust alone."
Pope John XXIII

TASZÁR, HUNGARY, 2007
Taszar is a small village situated southwest of Budapest. Its airport hosted multinational and U.S. peacekeeping forces as recently as 2004, and the excellent relations between the U.S. troops and local population, as well as connections with U.S. government officials, led to the formation of a Sister City relationship.

"Mankind must remember that peace is not God's gift to his creatures; peace is our gift to each other.”
Elie Wiesel Nobel Peace Prize 1986 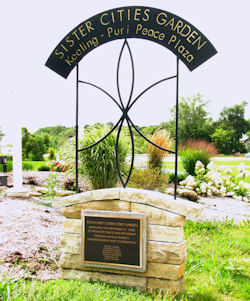 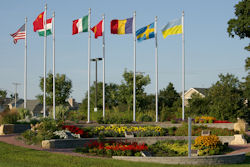 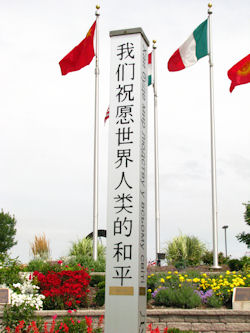 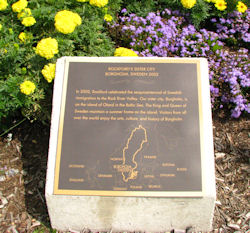 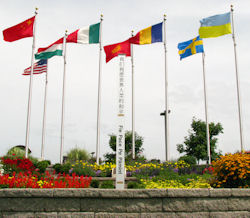 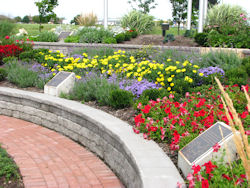 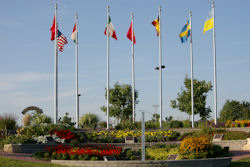